Spotted Thick-knee is also referred to as Stone Curlew or Cape Thick-knee. Although it has isolated populations in the Arabian Peninsula, the bulk of its population is in sub-Saharan Africa. In Kenya it is common across much of the region, largely excluding , Mt.Kenya, Aberdare, Kakmega forest , Mt Elgon. It generally prefers open habitats, 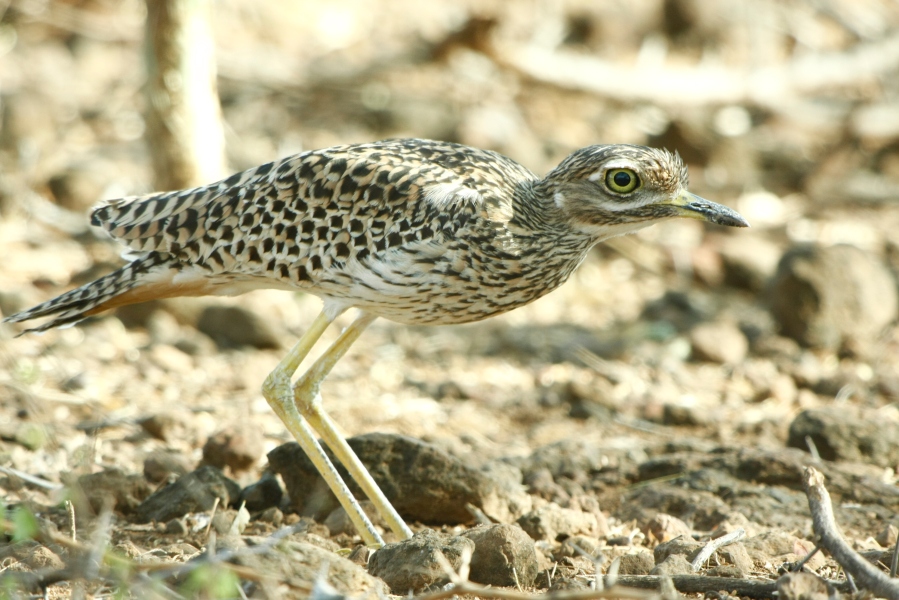 especially savanna and grassland but also woodland fringes, low stony hills and urban habitats, such as parks, playing fields and parks. This bird is largely resident in our region
It mainly eats insects, doing most of its foraging in a plover-like manner, repeatedly running forward, stopping then jabbing prey with its bill. The following food items have been recorded in its diet; Beetles, crickets ,ear bugs, butterflies and termites and ants.
This species is monogamous, usually territorial solitary nester, although it occasionally forms loose colonies. It often rears two or even three broods in a single breeding season.The nest is a shallow scrape in the ground, sometimes unlined but usually with a lining of a few twigs, animal droppings, leaves or stone chips. It is usually located in grassland, either out in the open or partially concealed beneath a bush.