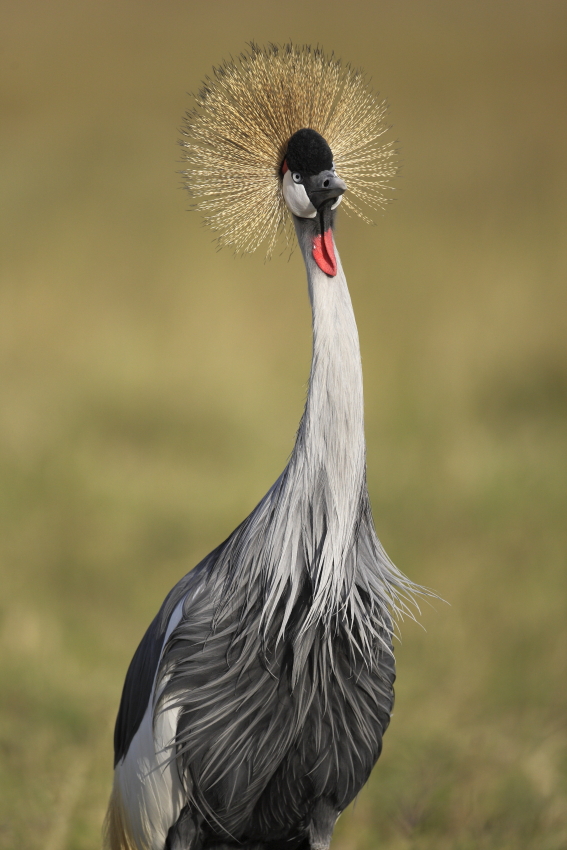 Grey Crowned Crane has a breeding display involving dancing, bowing, and jumping. It has a booming call which involves inflation of the red gular sac. It also makes a honking sound quite different from the trumpeting of other crane species. Both sexes dance, and immature birds join the adults. Dancing is an integral part of courtship, but also may be done at any time of the year.Its body plumage is mainly grey. The wings are also predominantly white, but contain feathers with a range of colours. The head has a crown of stiff golden feathers. The sides of the face are white, and there is a bright red inflatable throat pouch. The bill is relatively short and grey, and the legs are black. The have long legs for wading through the grasses. The feet are large, yet slender, adapted for balance rather than defense or grasping. The sexes are similar, although males tend to be slightly larger. Young birds are greyer than adults, with a feathered buff face.

In Kenya they are widespread in all wetlands and grassland field. They however, prefer breeding in Saiwa sawmp National Park in western Kenya and other high altitude wetland in Kenya.

The Black-headed Plover or Black-headed Lapwing (Vanellus tectus) is a species of wading bird of the family Charadriidae. It is found across sub-Saharan Africa.In Kenya specifically, it is found in areas like Tsavo West and East,Lake Baringo, Lake Bogoria,Samburu and Meru National Park. Although not migratory, there is some seasonal movement. Its habitat is wet lowlands close to water. It often feeds in drier habitats, such grassy scrubland.

This bird is readily noticeable and unmistakable. It is medium-large with a mainly black head and white forehead. The lower face and bands across the rear head and nape are also white. The crest is a weak black. The bill and legs are red. The tail is white and tipped black. In flight, the upperwings have black flight feathers and brown coverts separated by a white bar. The underwings are white with black flight feathers.

The diet of the Black-headed Plover consists of insects and other invertebrates that is picked from the ground. The call is a metallic tink-tink.