Bare-eyed Thrush has Brownish-grey above; blackish speckles on throat, pale grey breast and rufous belly. The orange-yellow patch of bare skin around the eye is diagnostic. It is widely spread in Arid lowlands, agricultural fields, dry savanna and dry shrubland of Eastern Kenya  and monotypic. His behavior is Fairly inconspicuous, although locally common. The diet includes fruit. 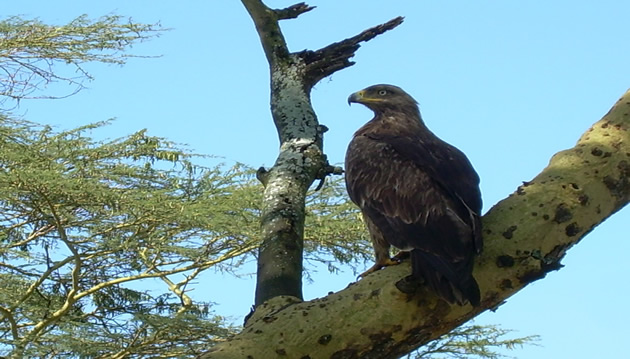 A relatively large, handsome bird of prey, the steppe eagle closely resembles a number of related eagle species such as the tawny eagle, Aquila rapax, that occur within its extensive range . The plumage is mostly dark brown, with well-defined bars on the flight and tail feathers . The main distinguishing features are the reddish-brown patch on the nape of the neck, the oval nostrils, and the long, wide gape. There are two recognised subspecies  of steppe eagle, Aquila nipalensis nipalensis and Aquila nipalensis orientalis, the latter being slightly smaller, with paler plumage. The juvenile steppe eagle resembles the adult but is paler brown, with a characteristic broad white band running along the underside of the wing.

When Moses, a colleague of mine informed me that I was to guide a client from England for 8 days birding safaris, I had no idea that my client will torn out to be Nigel Marven, the famous Animal Planet natural history presenter.  We had good time birding together in Kakamega forest, Tugen hills,Lake Baringo, Bogoria, and Nakuru and finally Nairobi National Park. We managed to spot over 300 species of birds and lucky enough, we managed to see most of our sort after species with exception of four or five species.